Hands Across the Sand is a movement made of people of all walks of life and crosses political affiliations and the borders of the world.

This movement is not about politics; it is about the protection of our coastal economies, oceans, marine wildlife and fisheries. The accidents that continue to happen in offshore oil drilling are a threat to all of the above. Expanding offshore oil drilling is not the answer, embracing Clean Energy is.

Let us share our knowledge, energies and passion for protecting our planet from the devastating effects the burning of filthy fuels and offshore drilling present.

What can I do?

On June 25, 2011 the people of the world will join hands to champion clean energy solutions to our filthy fuels problem. Embracing a clean energy future now is the path to a sustainable planet.  Click HERE to find an event near you, or to help organize an event in your area.

What are we trying to accomplish?

On a local, national and global level, Joining Hands sends a powerful visual message of human solidarity to our nation’s leaders. We are unified in the defense of the air we breathe, the water we drink and the food we consume from dangerous, dirty energy sources. Every time we join hands that message is reinforced.

It’s simple and logical. Embrace clean energy. A line in the sand is a powerful thing. They invade our homes, lurk in our backyards, wander our streets, swim in our ocean, float down our rivers and streams, and find shelter amongst trees and bushes.  They are found in the most populated and the most remote places on Earth.  They need no resources to persist and may indeed outlive the human race.  We cannot ignore them, we cannot escape them and we cannot destroy them.

So what can we do?  We can stop producing them.

Single use plastic grocery bags are the most widely distributed product in the world.  The average family accumulates hundreds of plastic bags per year without realizing the harm single use plastics cause to humans, animals, and the environment.  In fact, it is estimated that, world-wide, approximately one billion plastic bags are used every minute!  It is easy to think of plastic bags as free, abundant and disposable tools for improving our quality of life.  They are in fact environmentally expensive; one cost is that both land and ocean animals die from entanglement or ingestion of plastic bags.  They are persistent; plastic bags can take up to 1000 years to photo-degrade (break up into small pieces), and do not ever biodegrade.  And they reduce our standard of living; plastic bags disrupt our appreciation of nature’s pristine landscapes.  More significantly, they clog storm drains, increasing the chance and severity of flooding during rainy seasons.

The overwhelming prevalence of plastic bags on Earth has created a problem so extensive that many countries around the world are taking action to prevent plastic bag distribution.   As early as 1988 environmentally minded people realized the costs of single use plastic bags far outweighed the benefits.  By 1998, thirty Alaskan villages banned the plastic bag.  Now, in 2011, multiple countries in Africa including: Kenya, Botswana, Rwanda, Uganda and South Africa have banned the plastic bag.  African countries are not the only ones catching on: Bhutan, Brazil, Italy, Macedonia and Taiwan have all instated plastic bag bans.  Multiple cities in the United Kingdom, France, India, Canada, Australia and the United States have also officially banned plastic bags.  And those are just the places that have prohibited plastic bag distribution.  Many other countries such as Belgium, Denmark, Germany, Ireland, Israel and the Netherlands, have implemented a plastic bag tax to slow the proliferation of the bag.

There is clear evidence that taxes and bans do reduce the amount of single use plastic bags in the environment.  In 2002 the government in Ireland introduced a plastic bag fee called PlasTax. The law resulted in a 90% reduction in plastic bag consumption, a huge reduction in plastic bag litter and a significant decrease in oil use. Individual corporations and companies have proven that they can make a difference too. Whole Foods Market banned plastic bags on Earth day in 2008 and has since estimated that reusable bag use tripled in just one year!

Here in California, we are fighting for change with hope and determination.  In 2007, San Francisco jump started the bag-ban trend in the United States.  Upon learning that plastic bags cannot legally be taxed in California, San Francisco became the first city in the state to pass a full ban on non-biodegradable plastic bags in major grocery stores and pharmacies.  Since San Francisco’s legendary decision to ban the bag, a cascade of anti-bag campaigns aiming to eliminate single use plastic grocery bags have swept through California.  A few other California cities that have effectively “banned the bag” include Malibu, Fairfax, Palo Alto and San Jose.  In November 2010, Los Angeles County passed a plastic bag ban affecting unincorporated areas, but as the ban is not applicable to LA cities, the cities are currently working for bag bans independently.  On January 25th 2011, Marin County Board of Supervisors unanimously passed an ordinance that will ban plastic bags and charge a five cent fee for paper bags beginning in 2012.  Also in late January, Santa Monica approved a ban that will be enacted in September of this year!  Calabasas joined the many cities striving towards sustainability by eliminating plastic bags in February.  Most recently, Albertson’s in Carpinteria has agreed to run a pilot program that will test the practicality of banning plastic and paper bags from all Albertson’s stores.  Albertson’s is not the first corporation to take this approach.

Although battles are being won at the local level, the opposition is not going down without a fight.  Oakland, Fairfax and Manhattan Beach have all met major resistance by the American Chemistry Council, the main proponent of single use plastic bags.  The Save the Plastic Bag Coalition, as well as the Coalition to Support Plastic Bag Recycling have both filed and won lawsuits against the cities, claiming that the bans were passed without sufficient Environmental Impact Reports.  While plastic bag bans enacted by Oakland and Manhattan Beach are currently ineffective due to this complication, Fairfax avoided being sued by passing a voter initiative to ban plastic bags.

Small-scale successes have given us the hope and the knowledge essential for large-scale change.  Although Californians’ previous campaigns for a statewide ban have failed, defenders of the environment are not giving up.  The movement away from single-use plastics and towards sustainable practices is continually gaining speed. Education campaigns and recycling programs are steps in the right direction, but statistics have shown they are not enough to change shoppers’ behavior. Experience is telling us that in order to get results, make the plastic bag a valuable commodity, or get rid of it.

At Ocean Futures Society we support banning single use plastic bags because we stand behind the principle, “There is no waste in nature.”  This means that in nature everything is recycled in one way or another. Even the harmful chemical defenses of plants and animals are naturally broken down in to harmless raw materials that become available for reuse in another form. With this valuable lesson from nature we conclude that we should only produce materials that can be easily rendered harmless after use and then become raw materials for another use.

We strongly believe it is crucial to stop producing disposable plastic bags that create waste neither humans nor nature can adequately dispose of.   There are more environmentally friendly materials that can be used to carry our groceries and belongings. We are not against the use of durable plastic for long-lasting products, it just does not make sense to use a plastic bag for ten minutes to carry our groceries and then throw it away, liberating it to linger on our planet for thousands of years. We are smarter than that. But it takes a willingness to create change. We need to rise up the challenge and support those companies and cities that are moving in the right direction; the direction we need to follow so we can all enjoy a more sustainable future.

Every day water mixes with common household (cleaning products, fertilizers) and environmental pollutants (oil, pesticides) that flow from our homes, offices, roads and landscapes and, eventually, into our oceans.  Compound this daily, times our population, and multiplied over years and years, and our oceans, lakes, rivers, streams and ponds are paying the price.

And when you stop and think how much of a part our water plays in our everyday lives, it behooves us to keep it clean.  On The Surfrider Foundation’s Ocean Friendly Gardens page of their Website, they reports that, “runoff from residential landscapes affects the quality of our oceans and the quality of our lives. The sediment in water reduces clarity; nutrients increase algae populations and red tides; bacteria close beaches; debris can choke and suffocate aquatic species; and pesticides picked up off a landscape can poison fish consumed by humans — all of which degrade the natural beauty, and our enjoyment, of the ocean.” 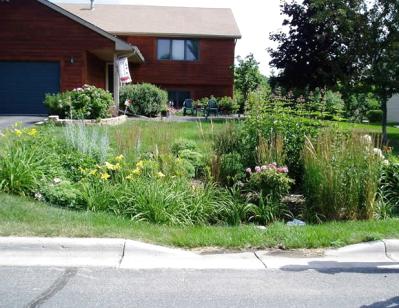 One of the ways that each of us can do our part to minimize polluted run-off from reaching our waters is by opting to plant a rain garden in your yard instead of a conventionally landscaped garden.

Rain gardens incorporate native shrubs, perennials, and flowers planted in a small depression, which is generally formed on a natural slope of your yard.  The natural design temporarily holds rain water runoff that flows from the roof of your house, patios and the rest of your lawn, allowing your garden to drink from the accumulated water…water that would usually run off into the streets and gutters, picking up pollutants along the way, and eventually landing in our oceans.

As rain gardens gain exposure and popularity, many landscaping companies are becoming rain garden advocates and experts and home improvement centers often host “how to” seminars on rain gardens if you need more information.

Rain gardens are effective in removing up to 90% of nutrients and chemicals and up to 80% of sediments from the rainwater runoff. Compared to a conventional lawn, rain gardens allow for 30% more water to soak into the ground, making them an easy and beautiful way to help preserve our oceans and waters.