First made famous by the great naturalist, Charles Darwin, the diverse assortment of mammals, birds, reptiles and marine life found on the Galapagos Islands make for an unparalleled look at what happens when nature is left unspoiled by the footprint of the modern way of life.

And while the Galapagos Islands have become mystified over the years, visitors shouldn’t expect to encounter freaky hybrid animals.  There are no iguana-mingos or sea-boobies, but there are plenty of marine iguanas, pink flamingos, sea lions and blue-footed boobies, as well as penguins, dolphins, whales, the famed Alcedo tortoises, and many, many other animals including Darwin’s finches.

What is a bit unique (though still far more cool than freaky) is that, besides figuring out some kind of harmonious and symbiotic relationship among themselves, these animals seem to tolerate if not welcome human presence.  There are countless stories of dolphins “dancing” in the water or mimicking tourists as they swim, or finches perching on peoples hands to grab a quick snack of seeds.

“I met up with a blue-footed booby standing smack in the middle of the footpath. It made no offer to step aside and let me pass. Looking into its birdy eye, I saw . . . nothing at all. No fear, but also no aggression. No anxiety, affection, hope, recognition. Its indifference was profound, as if I were invisible, although I’d been told that if I did step too close it might jab at me with its beak. This strange fearlessness can’t be explained by any local history of kindness on the part of man. Even Darwin killed birds and ate tortoises. The blue-footed booby wasn’t afraid of me, but the name for this is not tameness. It’s genetic innocence. Since the animals evolved in the absence of man, their innocence exists at a molecular level. I saw it again in the eye of an albatross just before it turned to begin its mating dance; I saw it in the stare of a sea lion nursing her pup on the beach. The animals felt nothing for people one way or the other, yet all around them were people, including me, in love with the animals.”

Isabella is the largest of the archipelagos that make up the Galapagos Islands, which were formed right smack on the equator over a million years ago when a series of volcanoes merged.  Not many tourists visit this Island, which has the largest colony of Galapagos tortoises and picturesque beaches complete with coconut palms. 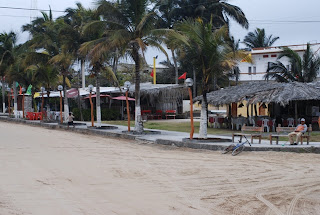 Sidenote – because of the flourishing animal life on the Islands, it is the general assumption that the plant life is just as abundant.  The Galapagos is not a lush Gilligan’s Island type place.  The Islands tend to me more barren and rocky and, in some areas, are devoid of vegetation entirely, mostly due to the recent volcanic activity.

Puerto Villamil is the main “hub” of Isabella and thrives mostly on fishing, tourism and agricultural activities.  With its sandy streets it is a welcomed escape from the more touristy Islands of the Galapagos.  There are very few motor vehicles and the whole town seems to adapt to the slow pace of the local tortoises.  Villamil has friendly (mostly Spanish-speaking) locals who are happy to point you in the direction of the nearest great place to find a hammock and relax, swim and snorkel – all within walking distance from the main drag.  The town has a good selection of accommodations and small seafood restaurants.  In Isabella there are no banks, so remember to bring enough cash to last you your entire stay.

But before you book your flight to Isabella, stay tuned for upcoming articles exploring the other Islands of the Galapagos…