1891 Castle Inn – 1539 Fourth Street, New Orleans, Lousiana
The Inn is currently for sale and only accommodating long term stays, however, chances are this historic treasure will be sold with its permanent residents in place…at least 2 Big Easy residents who passed away over 100 years ago. This historic guest house is located in the historic Garden District and has views of the Mardi Gras parade route. The “translucent man” was a driver staying in the guest quarters of the hotel when he accidentally set his room on fire and was killed. Known for loving ladies, music, practical jokes and a stiff drink in his day, he continues to reside at the hotel. He is thought to be responsible for the coughing and whistling heard in the hallways, objects moving or being hidden and is seen in mirrors or out of the corner of guest’s eye. He loves to tinker with radios, televisions, ceiling fans, and lights. If you can’t find an object in your room, look in a drawer or in a place where you would not leave it…one guest, upon checking out, could not find the receipts of the past four days of shopping and travel which the husband had collected in his wallet. His wife found them all in the microwave after they searched the room from top to bottom. Other reports tell of a little girl who drowned in the pond behind the house and still wanders the grounds and surrounding neighborhood, presumably in search of her mother. Guests report a feeling of brushing against bare legs (especially women), beds bouncing up and down, and the sound of bare feet running down the hallway.

Queen Mary – 1126 Queen Hwy., Long Beach, California
The Queen Mary ocean liner sailed the North Atlantic Ocean from 1936 to 1967, and is now permanently moored in Long Beach, CA.  Her beautiful salons and staterooms are a testament to the Art Deco era…and to a host of unexplained sightings, sounds and spooks.  The Queen Mary has been a constant source for stories, articles and documentaries about supernatural sightings and other unexplained activity aboard the historic ship, the engine room and pool being the most active locations.  In 1966, 18-year-old engineer John Pedder was crushed by a watertight door in the engine room during a fire drill – to this day his ghost is said to haunt the ship.  Other accounts recall seeing the spirit of a young girl named Jackie who haunting the first class pool on board the ship. 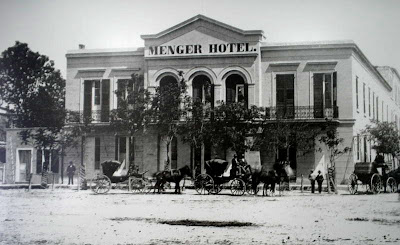 The Menger Hotel – 204 Alamo Plaza, San Antonio, Texas
The oldest hotel west of the Mississippi still in operation, The Menger got its start as a boarding house and has played host to a colorful bunch of famous figures throughout its history, including General George Patton, Robert E. Lee, Oscar Wilde, Ulysses S. Grant, “Teddy” Roosevelt, to name a few.  Ghostly sightings range from guests feeling a maid smoothing the bed sheets with them still in them, to voices of a woman repeatedly calling for room service.  A few years ago, a guest wanted extra towels, so he opened the door of his room and asked a maid who ignored him. The guest called the front desk to report the rude behavior and described the maid and her uniform, to find it was one that was worn in the late 1800s! Stanley Hotel – 333 Wonderview, Estes Park, Colorado 80517
Heeeeeeeeere’ s Johnny!  The Stanley was the inspiration behind Stephen King’s “The Shining.”  For a real fright, request room 217 – this was the room where King stayed while working on the novel.  However, the former servants quarters, located on the 4th floor (room 418 in particular) have the most ghostly activity reported.  Past guests have reported hearing children playing in the halls – yet when they speak with the front desk, they are told that no children are currently staying at the hotel.

Lizzie Borden Bed & Breakfast – 230 Second St., Fall River, Massachusetts
After it was built in 1845, Andrew Bordwn bought the home for his family, including his youngest daughter Lizzie.  During the morning of August 4, 1892, around 10:45 AM, Borden’s father, and her stepmother, Abby Durfee Borden, were murdered in the family home with a hatchet.  Lizzie was the prime suspect and, although she was tried and acquitted of the crimes she was ostracized by the community of Fall River.  For the first time since the murders, the public is welcome to view the murder scene, and spend a night in the actual house where the murders took place…and get the opportunity to run into any ghosts that may be still bound to the house.

The Heathman Hotel – 1001 SW Broadway at Salmon, Portland, Oregon
Centrally located in downtown Portland, The Heathman has been named “One of the best  places to stay,” according to Conde Nast Traveler and “One of the 500 best hotels in the world,” by Travel + Lesiure’s 2009 awards.  It has also been the scene for many paranormal experiences by its guests, specifically the rooms in one column that end in 3 (room 703, 803 and 1003 in particular).  Guests of the hotel will leave their room clean, and upon return find a towel used, a glass of water out, a desk chair moved…yet the hotel’s records report no one used the electronic key to get in to the room.

The Landmark Inn – 230 North Front St. – Marquette, Michigan
Located on the shore of Lake Superior, this hotel’s history spans a century…plenty of time for spirits to have accumulated and taken up residence at the Inn.  In 1930, when the hotel first opened, a librarian in town fell in love with a sailor who was to make one last journey before coming home to marry her.  But the ship and crew never returned.  The librarian is said to still haunt the Lilac Room, which has a view of Lake Superior, and is believed to be watching for her sailor’s return.  Guests of the Lilac Room report screws being left in their sheets (even after room service changes them), men have trouble getting their key to work in the door, and employees receive calls to the front desk from the room, even when it is unoccupied and vacant.   One guest was dining with her husband noticing another woman standing at the bar whose skirt was being pulled out “like someone had pulled out the skirt to examine the fabric, but no one was there.”   Thinking that she might have imagined, she had her husband look and once again it happened.  Upon relaying this story to a bartender during another stay at the hotel, the bartender told the visitor of the reports of ghosts in the hotel and the woman said, “I always thought so, to this day I still remember the skirt, covered with lilacs.”  Startled, the bartender told her about the stories of the Lilac room.  The woman got so shook up that she felt ill and had to leave.