Families looking for the ultimate summer destination have long journeyed to Hawaii's Big Island in search of the many wonders the Aloha State has to offer. For those vacationers seeking a beach house rental in Hawaii, a trip to the city of Hilo is a must! Hilo is on the lush and wet side of the Big Island of Hawaii, so a light raincoat is a must-have for any outdoor activities. There is plenty to do here, like going to se the lava, hiking to waterfalls, and to the beach.

Natural wonders await all vacationers in Hilo, Hawaii! This town on the Big Island is known for the Wailuku River State park, featuring Waianuenue, or Rainbow Falls, with its colorful mist effects. The bubbling basalt-lava rock pools known as the Boiling Pots are nearby. To the south is Hawaii Volcanoes National Park, home to rainforests and the active Kilauea and Mauna Loa volcanoes. 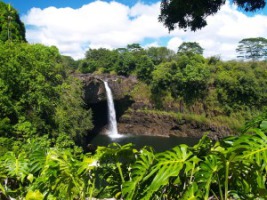 Nature-loving travelers will also want to check out Rainbow Falls, a highly accessible cove that is one of the more beautiful natural attractions in the region. It is the perfect place to visit early in the morning for a picnic, when you have the best chance of seeing rainbows. The main viewing area for seeing a rainbow is east of the falls. You can only see rainbows when you are standing with your back towards the sun. The Rainbow Falls cascade 80 ft over a lava cave that, according to legends, is home to the ancient Hawaiian goddess Hina, the goddess of the moon. Compared to its neighbor, the 'Akaka falls, Rainbow Falls wins out for accessibility and how close you get to see the waterfall; either directly from the parking lot or from the top of the falls after a several minute hike.

The nearby Lili'uokalani Gardens are another natural wonder, created in the early 1900s to commemorate the island's immigrant Japanese population that helped develop the old Waiakea Sugar Plantation. For cultural tourists, Wailoa State Park features a 14-foot tall statue of the famed King Kamehameha I, the first king of Hawaii who reigned from 1782 until his death in 1819. 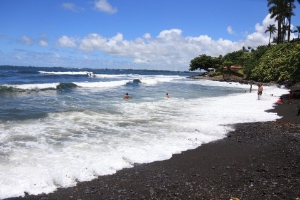 The immaculate beaches remain largely undeveloped, preserving their pristine postcard-like beauty. Families will have a lot of fun relaxing on the water's edge and soaking up the sun or wading through the shallow waters for a swim. The beach at Honoli'i provides an excellent swimming area, especially for little children, but the water is deep and drops off abruptly. The pond is popular with thrones and shoreline fishermen. The area is frequented by surfers who ride not on only the waves offshore, but also on a break just outside the northern point of the bay. This is one of the most popular surfing breaks in the Hilo area. Facilities include restrooms, showers, roadside parking, and a paved path from the road down the bluff to the beach, which is composed primarily of black sand and pebbles.