For eco-friendly, adventure travelers, romantics and those wanting to 'get away' Pahoa is a PERFECT vacation spot to rent a beach house in a lush Hawaiian jungle, but only a few blocks to the beach! Pahoa is located in the Big Island's Puna District. It is also known as the Big Island's hippie capital, a place where New Agers, hippies and others living an alternative lifestyle reside. Where else would you expect to find a nude beach?

Fun Things to Do in Pahoa: 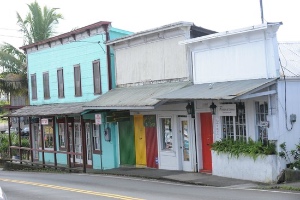 The pride of "downtown" Pahoa is its raised wooden sidewalk, the false-front stores and the numerous old buildings, which give it a "Wild West" atmosphere. In fact, Pahoa has the highest concentration of old buildings in Hawaii. There are a few small restaurants with a variety of cuisines, craft stores, galleries, boutiques and the island's oldest movie theater. The Pahoa Marketplace, which is located at the edge of town, has more shops, but is not as scenic as the main street. Pahoa also has schools, a church, supermarkets, police and fire departments, a large public swimming pool and a post office. 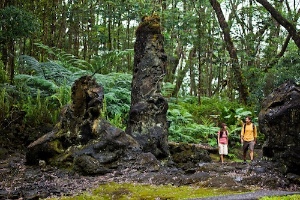 An attraction just outside of Pahoa, in the Big Island's Puna District, is the Lava Tree State Park. Because where else do you get a chance to see lava trees? This interesting stop was once a lush rainforest, but in 1970, fast-flowing pahoehoe lava streams hit the wet ohi'a trees and encased the trees and burned the wood inside. The lava covered the trees from bottom to top. As the lava drained away and the moisture inside the trees cooled the lava, a hard exterior shell was formed. The wood inside burned away and only the outside lava shell remained. Each tree has a different shape, and it takes little imagination to see craggy faces staring back at you. Many of the trees are covered in moss; others have fallen to the ground, exposing their interior pipe-like structure. Also, there are some large monkeypod trees here with huge roots, which are equally amazing. These hollow stone lava skeletons are an otherworldly rock forest. 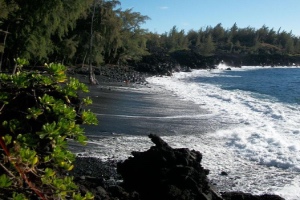 One of the vacation beach homes we have for rent sits 3/4 of a mile north of the black sands of Kehena Beach (please note that this beach is clothing-optional), where dolphins are known to come by and frolic with swimmers. Book a beach villa here and you'll only be a 20-minute drive from popular restaurants like Paolo's, Ning's and Kaleo's and 90 minutes by car from the very popular Hawaii Volcanoes National Park. The bustling town of Hilo, 32 miles north, has many shops, restaurants, and sources of entertainment as well. 10 miles down the coast from at Pohoiki, is the brand new (2018) black sand beach at Pohoiki (Isaac Hale Beach Park), a spectacular surfing beach. 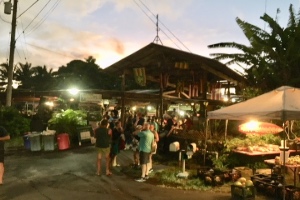 Uncle Robert's Wednesday Night Market, extraordinary lava flow museums and site-seeing in and around Pahoa Village must be part of your vacation plans. Just a short drive away is the town of Kaimu for local flavor foods, vendors and live entertainment... a MUST SEE! Take a Sunday drive to the Maku'u Market on Highway 130 for over 100 food, crafts and art vendors and lots of local vibe!