Virginia Beach, a coastal city in southeastern Virginia, lies where the Chesapeake Bay meets the Atlantic Ocean. A 3-mile boardwalk stretches along its beach-lined oceanfront. The bayside First Landing State Park, at Cape Henry, near the point where the Chesapeake Bay and the Atlantic Ocean meet, marks the arrival of the Jamestown colonists from England, on April 26, 1607. 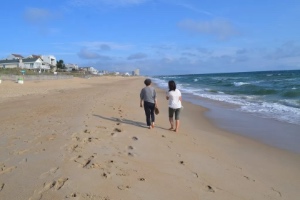 Virginia Beach is the most populous city in Virginia. This part of the state is known as "America's First Region". This resort city has miles and miles of beaches and hundreds of hotels and restaurants along the oceanfront. Every year the city hosts the East Coast Surfing Championships as well as the North American Sand Soccer Championship, a beach soccer tournament. It is also home to several state parks, several long-protected beach areas, three military bases, a number of large corporations, Virginia Wesleyan University and Regent University, the international headquarters and site of the television broadcast studios for Pat Robertson's Christian Broadcasting Network (CBN), Edgar Cayce's Association for Research and Enlightenment, and numerous historic sites.

The city is listed in the Guinness Book of Records as having the longest pleasure beach in the world. It is located at the southern end of the Chesapeake Bay Bridge-Tunnel, the longest bridge-tunnel complex in the world.

The city is home to several points of interest in the historical, scientific, and visual/performing arts areas, and has become a popular tourist destination in recent years. The Virginia Museum of Contemporary Art features regularly changing exhibitions in a variety of media. Exhibitions feature painting, sculpture, photography, glass, video and other visual media from internationally acclaimed artists as well as artists of national and regional renown. MOCA was born from the annual Boardwalk Art Show, which began in 1952 and is now the museum's largest fundraiser. By operating at a national standard, MOCA received accreditation from the American Alliance of Museums in 2010.

The Virginia Aquarium & Marine Science Center is a popular aquarium near the oceanfront that features the 300,000-gallon Norfolk Canyon Aquarium, containing sand tiger, nurse and brown sharks, as well as sting rays and other large open-ocean dwellers. There is also a 70,000-gallon sea turtle aquarium, sea turtle hatchling laboratory, hands-on ocean exploration exhibits, jellyfish and octopus aquariums, and even a life-size model of a humpback whale. Other features include the Owls Creek salt marsh and a nature trail.

One of the World's Largest collections of World War I and World War II aircraft is located at the Military Aviation Museum in the Pungo area of Virginia Beach.