Governor's Harbour is the main town on the island of Eleuthera, with a charming collection of 19th century homes and churches overlooking its historic harbor. Eleuthera is most famous for its 100 miles of spectacular, deserted beaches. The island, home to just 8000 residents, is safe and friendly. The snorkeling, diving, and fishing on the island are world class. Boating, surfing, and other water sports are also popular. You can rent power boats, sailboats, sea kayaks and bikes. There is excellent sightseeing, as well. Eleuthera has vast caves, cliffs, and a bottomless ocean hole. 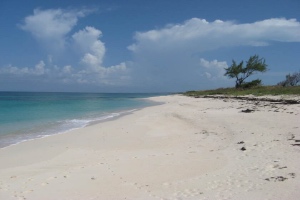 For most people who make the trip to Eleuthera, the island of freedom, they come for its peace and serenity -- that feeling of being far removed from the rest of the world. One of the best things about Eleuthera is that you'll almost always have a beach to yourself. And the sand is pink! You can go swimming and snorkeling and see stingrays and other aquatic life here. The Glass Window Bridge is one of the coolest spots to visit on the island.

The Ocean Hole is a spot you'll never forget. It is supposedly over 600 feet deep, which is terrifying, but you must jump in any way. All kinds of fish come up to you at the dock, and they are all SO beautiful! The Leon Levy Native Plant Preserve is a must for outdoors lovers, where you'll see different birds and other wildlife around. The Eleuthera Island Farm has a small shop that sells produce, sauce, handmade goods, and other food. The Queens bath is a rock formation that is breathtaking. The waves crash onto the shore and there's all sorts of interesting tide-pools with little fish to explore.

Preacher's Cave was discovered in the 1600's by a captain who shipwrecked here. Also, visit Hatchet Bay Cave and Spider Cave. The entire island is made up of one major road, which makes sense as to why hitchhiking is so common. You will often see locals getting rides from strangers. On one side of the road, you'll see the Atlantic Ocean, and the other side you'll see the Caribbean Sea.

Just a mile away from Governor's Harbor, is the village of James Cistern, which has two grocery stores, a town dock where the fisherman bring their catch every day, a produce stand, and three small local restaurants, Kel-D's, Lee's Cafe, and the new Leorose Sunset Beach Bar and Grill. James Cistern is also the home of Stubb's famous barbecue, now called Tamarind Tree Grill, every Friday and Saturday, which is not to be missed. 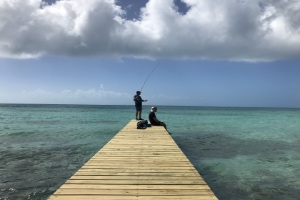 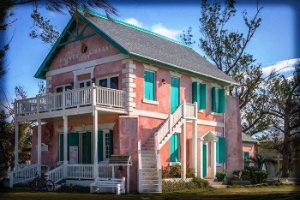 Haynes Library is one of Eleuthera's finer historical landmarks. Saved from the wrecking ball and refurbished in the 90s, this quaint library has become one of the popular attractions on the Eleuthera. The pink exterior adorned with turquoise hurricane shutters and trim, finished off with white steps and railings is classical Bahamas. Stepping into the library gives one a strong sense of what it was like when it was originally built in 1897. The views from inside and out are simply beautiful.