I’m not talking about the creepy kind of swimming with the fishes that you hear about in old mob movies where some poor guy’s feet have just been coated in cement and he’s about to be offed and tossed overboard.  Eeew.

No - I’m talking about the whole “one-with-nature” kind.  You know…where you get to swim along side whale sharks, or interact with dolphins, or even where you can watch a group of sharks feed.  Maybe this sounds weird to some people, but I’ve always loved animals, especially sea animals.  My favorite show used to be Flipper, I have an adopted manatee named after me, and I only eat dolphin-safe tuna.

Known as the “cow of the sea,” manatees are large, gray mammals with bodies that taper to a flat, paddle-shaped tail. They have two flippers and their head and face are wrinkled with whiskers on the snout. Manatees are gentle herbivores and live in the warm shallow waters off of the coast of Florida during the winter, but are known to travel to Alabama, Georgia and South Carolinain the summer.  Manatees are slow-moving by nature and surface throughout the day making them vulnerable to boat propellers.  Many operations that offer manatee tours donate a portion of their proceeds to wildlife preservation organizations that help to protect these peaceful creatures – these are the only ones you should support as there are other business who add to the problem, rather than trying to educate about manatee preservation and protect against further harm to the species.  You can also adopt a manatee or donate money to help research, education, and conservation programs that promote protective legislation.

I’m sure you’ve seen the pictures of divers swimming next to sharks that look about as big as a school bus, and thought to yourself, “um, hasn’t this guy seen Jaws?!”  Well lucky for him, though these enormous creatures (they can grow upto 40 feet in length!) are sharks, they are only whale sharksand prefer plankton over people anyday.  They can be found off of the coast of the Philippines, Honduras, Indonesia, Madagascar and off of Mexico’s Yucatan Peninnsula.  Isla Holbox, in Mexico’s Riviera Maya region, sees these gentle giants migrate through their waters each year from May to September. 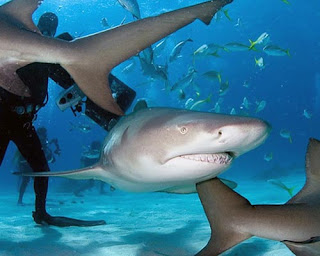 A different type of shark encounter entirely, many outfits in the Bahamas offer opportunities for vacationers to defy their basic human instincts and swim with some of the world’s fiercest predators in their natural environment.  Shark dives and feeds can be found in almost every area of the Bahamas (West End, Grand Bahama is rumored to be the best location) and each offers a different experience seeing different species of shark.  Caribbean Reef Sharks are most commonly seen, however, lucky divers may also spot Hammerheads, Tiger sharks, Bull sharks, Silky sharks and Lemon sharks.  Most underwater shark experiences have divers done chain mail (protective shark suit) and orient themselves with their backs against a reef while they, or a guide, feed the sharks.

Vacationers who want to swim with dolphins should look for opportunities where the dolphins are wild and free in their natural habitat, rather than with dolphins that are in captivity for the sole purpose of pulling tourists around all day.  Hawaiihosts many of these dives, with their first priority being to respect and protect the wildlife.  Dolphins are some of the most inquisitive, intelligent and playful animals in the world and will often approach swimmers and divers on their own – Sunlight on Waterin Kona, Hawaii boasts a 98% success rate of finding dolphins on their excursions!  It is not uncommon for divers to get a bonus and also see Humpback whales, Manta Rays and sea turtles.  Dolphins have been said to have a spiritual connection to humans, making this an experience that any vacationer will not soon forget.